A Tiny Bit Marvellous by Dawn French
My rating: 5 of 5 stars

Book Blurb:
This first novel by Dawn French is told through the eyes of a mother and her two teenage children. There's seventeen-year-old Dora, a stroppy teenager who's just come out of her first
relationship (it lasted a whole six weeks) and who's longing to escape to university; her long-suffering mother, Mo, a child psychiatrist who's baffled by the antagonist behaviour of her children; and sixteen-year-old Peter, who prefers to be known as Oscar due to his obsession with Oscar Wilde. Written in diary format, with each chapter narrated by a different voice, this is a hilarious, sharp and utterly compelling novel about the ups and down of family, sibling rivalry and growing up. With each chapter told from the point of view of one character, Dawn French's witty and engaging novel offers us an honest and insightful account into the relationships between children and parents. 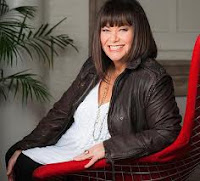 Dawn French (the comedian) is bloody brilliant, hilariously funny and gorgeous to boot! Can you tell I am a fan?

I saw her awhile back on the Graham Norton show (another show that I love!) promoting this book and I couldn't wait to read it expecting it to be absolutely hilarious.

Although the book does have some quite funny parts to it, I was very pleasantly surprised to find I was wrong about it the kind of book a brilliant comedian like Dawn French would write. This book, instead, gives us touchingly real portraits of a woman nearing 50, her relationships with her teen-aged children and her husband of many years . This book is aggravating, amusing, and in the end, incredibly poignant. I am so glad I read it.