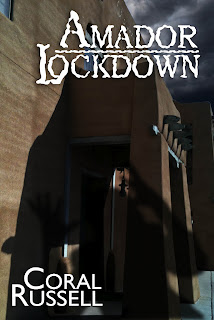 Coral Russell talks about her book Amador Lockdown:
You believe in ghosts, right? With Ghost Hunters, Paranormal State, Ghost Adventures, and Most Haunted on TV every week and the popularity of the low-budget movie and its sequels Paranormal Activity, it seems everyone believes in ghosts. According to Google, the subject of ghosts in books peaked around the 1930s then dropped off. Starting in 2000, 'ghost stories' have been gaining in popularity again.

Ghost Tours have sprung up around the country. Tour guides spice up history by recounting famous ghost stories in historic areas. Coral Russell went to her first ghost tour in Charlotte, South Carolina and was hooked. For a number of years she lived vicariously through TV shows. When she moved back to El Paso, she found out about the El Paso Ghost Tours and immediately talked her husband into going. A few months later she talked her step-son into going to the Amador Lockdown in Las Cruces, NM. They investigated and spent the night in the haunted hotel.

That experience was the seed for her new book--Amador Lockdown. Something has moved into the Amador Hotel. Hector, Marcos, Bev, and Tony of the Paranormal Posse are called in to either debunk the haunting or get rid of whatever is causing the problems. With the surprise arrival of Hector's son, he tries to keep his professional and personal lives separate, but whatever is haunting the Amador Hotel has other plans.

If you're not ready for a real ghost tour, this story will satisfy your ghostly cravings. Available on Amazon, Barnes and Noble, and Smashwords. Find out more about the story at the book's website – Amador Lockdown.

Three shadows glided down the alley between the Amador Hotel and an office complex. The sound of sneakers skidding to a halt reverberated between the walls of the buildings. At the back corner of the hotel, the shadows bunched up and paused.

“Okay, smart ass, the place is locked up. Now how do we get in?” Nelson whispered.

Julio’s plans weren’t that specific. He and Xavier had been two galans during Dalia’s quinceanera. She’d come to school a couple of weeks later waving around a picture of the Honor Court on the balcony, with a black shadow hovering behind her. That night, Julio started looking up information about the Amador Hotel, and ran across the news articles on the LC ComicCon and the Restore the Amador fundraiser. The news chalked it up to electrical problems in an old building, but Julio thought something else might be happening.

“The news said some windows were broken. Look,” he said, pointing down the back of the building. “It looks like two windows are boarded up. If we can get a corner loose, we’re in.”

A large, paved parking lot spread out behind the building. The closest lights were the streetlamps at the other end of the parking lot. Julio paused to make sure no cars were traveling around at three in the morning. “Go, go, go!”

They ran to the first window. “Xavier, you keep a lookout. Nelson, help me get the window open.” They both yanked at a corner of the plywood. It didn’t budge. “We should’ve brought a hammer,” Xavier whispered.

Nelson reared back and kicked at the board. The board didn’t budge, but the sound echoed out over the parking lot. “Dude, what the hell are you doing?” Xavier whispered.

“You can’t kick it in,” Julio said, as he grabbed Nelson’s arm and pulled him toward the next window. “This board looks warped. Try this corner.”

Xavier stood to the side as Julio and Nelson dug their fingers up under the corner of the board and yanked. A small squeal of metal answered their effort. “Otra vez…again. This time, brace your foot against the wall,” Julio instructed.

Nelson did what Julio asked. Julio nodded, and then both boys yanked again. The board gave a loud crack, but didn’t appear to move much. Julio knelt down to inspect the corner. It was loose, and when he pulled upward on the corner, a nice-sized gap appeared under his fingers. “We can squeeze in,” he said, standing up.

Nelson, the biggest of the three, turned around and knelt with his back to the wall under the window. He grunted as he squeezed first his head, and then his torso, up behind the board. He felt hands pushing his legs. “Hey,” he yelled, “cut it out!”

“Oh, shit.” Nelson braced his palms against the top of the windowsill and shoved. When the backs of his knees cleared the windowsill, he let himself tumble backwards onto the floor.

Julio’s head appeared a second later and, as soon as Nelson could get a hold under his arms, he yanked him clear of the window.

Xavier stuck his head inside. “Pull me in!”

Nelson grabbed Xavier’s arms and pulled until his feet and knees went thunk on the carpet.

“Owwwww! God damn it!” Xavier rolled over and clutched his leg.

“Something cut my leg.”

“Where?” Julio asked, flicking on his flashlight.

Nelson thumped him on the back, and then grabbed him under his armpits and lifted him to his feet. “I’ve had worse cuts on my eyeball.”

“Shut up! That fucking hurt.”

“Quiet,” Julio hissed. They all froze, listening for sounds of an approaching car or the whoop-whoop of a siren. “I don’t think they saw us.”

There was a ‘click,’ and then a small beam of light shone out from the flashlight in Xavier’s hand.

“Pussy,” Nelson said, as he poked Xavier in the ribs.

“Seriously?” Julio motioned toward the doorway with his beam of light. “Let’s do this.”

Julio and Xavier exchanged a look.

“Here, take mine.” Julio handed his flashlight to Nelson.

They made their way slowly through the back rooms to the main hall. They stopped, and bobbed their lights up and down on the staircase. “This is where we were when that picture was taken.”

“Xavier, why don’t you sit down on the steps while we go upstairs and have a look around?” Julio suggested.

“We should stay together.” Xavier’s voice wavered in the gloom.

“It does, Nelson, but we should stay together…just in case.”

“In case of what? A strong breeze ruffles your hair?”

“Julio, why did you invite this pendejo?”

“Nelson,” Julio said. “Come on, I thought you wanted to check this out.”

“Check out what? This ghost crap? I don’t believe in it. I just thought breaking into this place would be cool.”

“Okay, fine. Nelson, you stay down here. Xavier, come on.”

Julio followed Xavier up the staircase, and turned left at the landing to walk up the small staircase leading to the hotel rooms. Xavier flicked the light back and forth. “There’s a room back here.”

As Xavier played his light around, Julio said, “There’s nothing here. Let’s check the other rooms.”

They walked down the hall, and paused before each wooden door. The doorknobs felt slick under Julio’s hand. They poked their head into room after room.

“Oh, shit, I almost forgot,” Julio said, tugging something out of his pocket.

“This.” Julio held up a slim, gray, plastic stick with a rainbow of small light bulbs at the top. “It’s a K2 meter. You know, like the one ghost hunters use on TV. They say ghosts give off an electromagnetic field. No lights, no ghosts. Lights, there may be ghosts.”

“I bought it second-hand. It’s so old I have to stick a penny in here just to keep the thing on.” Julio pointed to a penny jammed a quarter of the way in at the top of the on/off button. He opened the door to a room. “I’m going to walk in the room, and you stay here. Hopefully this baby will light up.”

“What do the different lights mean?”

“It starts out green; then, as they get closer, the colors change to yellow and orange. If the ghost is right on top of you, it’s red. It will stay on red as long as the ghost is near.”

Julio walked around the perimeter of the small room, keeping the K2 meter pointed in front of himself. He reached Xavier. “Nothing. Let’s try the next room.”

“Hey, guys!” Nelson called out from below.

Julio and Xavier walked to the wooden railing and leaned over. “What?” answered Julio.

“This is boring. There’s nothing here except some old furniture.”

“Nelson, you can leave if you want. Thanks for helping us get in. We’ll catch up with you later.”

“Nah,” his voice faded as he walked out of sight underneath them. “I got nothing better to do... which is sad.”

“We’re almost done up here.” Julio opened the next door, and Xavier shone the light on another empty room. The rooms were not much bigger than a closet. He took slow, measured steps around the perimeter of the room, holding the K2 meter out slightly ahead of him. He was walking back toward the doorway when they heard a hard thud from downstairs.

The light left the room as Xavier lit up the railing. “What was that?”

Julio followed the wall the rest of the way to the door, and then stepped out into the hallway. “Nelson,” he called out. He watched Xavier’s beam of light flit back and forth along the main hall below. They heard another hard thud. Nelson’s flashlight rolled out into view from underneath the landing. A second later, Nelson fell hard on his backside to the right of the light. Xavier jogged toward the stairs, his leg apparently feeling much better.

Julio leaned over the railing. “Nelson, you all right?”
Posted by A.B. Shepherd at 7:00 AM